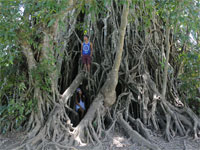 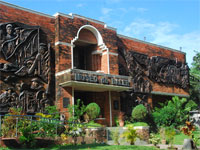 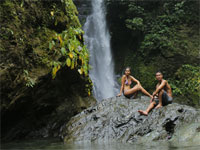 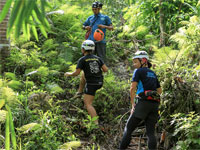 Trekking and climbing in, Aurora, Philippines

"We owe you a big thank you for the organisation and selection of locations for us of what was an excellent holiday."

Aurora is a fast emerging, exciting province within the Philippines which has Baler as its capital. It lies on the east coast of Luzon, the Philippines main island, 230 kilometres to the north-east of Manila.

Getting to Baler is achieved by travelling via the Sierra Madre mountain pass, which is a picturesque journey of around 5 to 6 hours, or by a 30 minute flight, when available.

Baler is the birthplace of surfing in the Philippines. It was discovered by the production crew of the classic film “Apocalypse Now”, who left their boards for the local populace to use, and from then on Philippines Surfing was born!

Surfing is pretty good all year round, with the best waves being between October and March, particularly December and January.

Sabang beach is best for the beginner, with fairly easy surfing.

Cemento beach is where you'll find the largest waves, and is perfect for the more advanced surfers. It is the venue for local surfing competitions.

Charlies Point, close to Baler Town, is the famous surf beach that was filmed in “Apocalypse Now”. This spot is recommended for all surfers.

Near to the town of Baler is the famous giant Balete Tree, also known as the Millennium Tree. Its trunk is so vast it would take more than 60 people to encircle it!

Take a walk around the Artists' Village in Dicasalarin where you'll be able to appreciate the creative talents of the local artists of Aurora.
At the Dicasalarin Lighthouse there's a picturesque 360 degree view of Baler.
Explore further either on horseback, or by riding an All Terrain Vehicle.

At Dicasalarin Cove you can sink your toes into the white sand, or you can enjoy a picnic at the historic Ermita Hill.

Aurora is known as the coconut capital of the Philippines, so it's just the place to sample fresh buko juice. The Pasalubong Centre is where you'll find some of Baler’s finest handicrafts, and is your chance to purchase and take home a hand woven "sabutan souvenir" - made from local raw materials.

The rich history and culture of Baler is celebrated through colourful festivals such as Aurora Day which occurs every February.

Savour a variety of flavours when you discover the many ways the locals prepare their staple food, the Pako, or fiddlehead fern. Perhaps you'll get a chance to join them for a Filipino "boodle feast"! Other delicacies include suman de Baler, and the local coco jam.

Relive history at Museo de Baler through photos of past events during the Spanish period and early communities depicting the history and culture of Aurora.

Other historical sights include the home and resthouse of former Philippine President Manuel L. Quezon, the province's beautiful Catholic church, and a number of historical markers

Send Us Your Enquiry