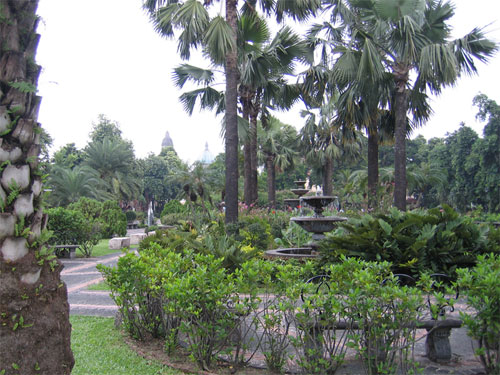 There are many attractions in Manila. A guided tour is the best way to appreciate them. Visitor attractions include the following:

The oldest fort in Manila, Fort Santigao was originally a wooden structure, replaced by a stone building in the late 1500s.

It was restored in 1951 and is a primary feature of an Intramuros tour.

The Walls of Intramuros

The walls that surround Intramuros contain open parkland and some important monuments. From the walls there are views over the city.

Intramuros has some charming colonial houses, each with their own character.

There have been five versions of Manila cathedral, and down the years these have been destroyed by fire, an earthquake, and more recently, World War II.

The latest construction was built in 1958.

Locally known as the Minor Basilica of the Black Nazarene, Quiapo church is one of Manila's most significant churches. Its statue of the Black Nazarene which is revered by filipinos, most notably in January, when vast numbers of devotees congregate and parade through the streets of the city.

Casa Manila is a colonial lifestyle museum that displays how wealthy Filipinos lived during the days of Spanish occupation.

Baluarte San Diego is the oldest stone fort in Manila and has some of the best views of Manila.

Chinatown in Manila is considered to be the oldest chinatown in the world.

Also named Luneta, this open parkland has statues of some of the most renowned Filipino heroes.

Manila Bay is famous for its sunsets. Along the water's edge can be found numerous cafés, restaurants and bars.

Send Us Your Enquiry by Email >>