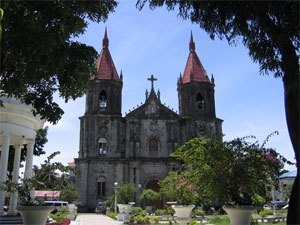 Milo Church is a Gothic renaissance church made of coral rock, built in 19th century.

The church, which is also referred to as the "Church of Women" because of the statues of women saints that decorate its pillars, was visited by Jose Rizal on his way to exile in Dapitan, Mindanao. 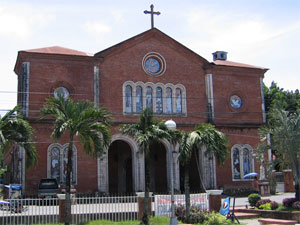 Pavia Church, or Sta Monica Church as it is locally known, is of Romanesque-Byzantine influence with its facade decorated with semi-circular arched windows and entrances.

It is one of the best maintained and restored churches in the province, and quite unique, being the only one made of red bricks in the whole of Panay.

Panay is an island in the western part of the Visayas. It has four main regions - Aklan, Antique, Capiz, and Iloilo.
Visitors to the island of Boracay, just off the north-west coast, usually arrive via one of two main airports - Caticlan, or Kalibo.
In the south of the island lies the city of Iloilo, which features a number of attractive houses, churches, and cathedrals. 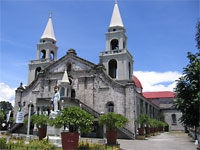 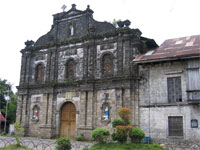 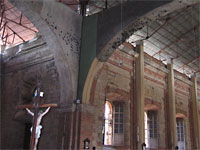 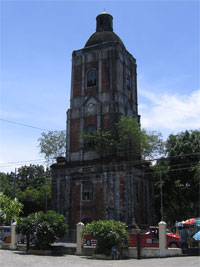 Iloilo is the main city of Panay Island, lying beside the Iloilo Strait, just across from Bacolod, Negros Occidental.

A settlement was established in 1566, as the Spanish conquest of the Philippines was underway.

The city really started to boom in the 19th century thanks to the development of its sugar industry.

Iloilo and its surrounding towns feature a number of fascinating buildings, churches, and colonial houses, much like neghbouring Negros Island, and the close proximity of Iloilo to Bacolod, separated by the Ioilo Strait, makes this combination of destinations an attractive option for visitors, with fast ferries connecting the two cities.

Jaro Cathedral is the first and only cathedral in the Western Visayas. It was built in 1864, and dedicated to St. Elizabeth of Hungary. The cathedral houses a 16th century lime stone image of the Blessed Virgin Mary - a statue which merited Papal sanction from Pope John Paul II during his Apostolic visit of February 21, 1981.

Jaro Bell Tower stands apart from the church - another example of the country's caution regarding the possibility of earthquakes.

Not far from Iloilo can be found Miagao Church. The amazing decorative facade has made this a UNESCO Heritage Site.

Santa Barbara Roman Catholic Church and Convent is one of the better restored and preserved churches in Panay. It is an excellent example of the Filipino baroque colonial architecture style. The building hosts a large colony of bats, and also has a very attractive courtyard.

Guimaras Island lies in the Iloilo Strait, between Negros and Panay. It is an exotic island with picturesque beaches, waterfalls, and springs, and is fast becoming a popular retreat for tourists.

The Antique region of Panay Island lies to the west, and is fast becming popular for eco-tourism adventures such as kayaking, trekking.

The Philippines is renowned for its colourful festivals, and one of the largest, the Ati-Atihan, is held in Kalibo, Panay, and starts on the third Monday of January. The festival is nicknamed, "The Filipino Mardis Gras", and is a week long celebration.

The Ati-Atihan Festival is a tradition now made even bigger and more fascinating in honour of Sr. Santo Nino (Child Jesus) - patron saint of Kalibo, Aklan.

Many years ago, when the Ati (the Tagalog meaning of negritos/black people) had settled down on their own land gained by the Spaniards when they came to the Philippines, there was one time when the Atis were starving for food. They came down and asked for food from the lowlands of Maraynon. Since then, the Atis dance and sing in appreciation and gratefulness for the helping hand. A genuine friendship of the two towns was born and since then the Maraynons began to paint their bodies and faces black and joined the celebration.

All the people who celebrated the fiesta get to enjoy what Aklan has to offer - the beautiful church, the costumes which includes painting their bodies in different colours, the colourful decorations, and the thousands of local and international tourists who visit every year in the month of January.

The Dinagyang is a religious and cultural festival in Iloilo City, also held every January.