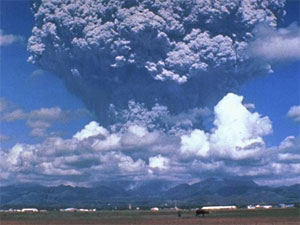 Mt Pinatubo caused devastation in June 1991, when it erupted having lain inactive for 450 years.

It was one of the largest eruptions of the century. and hundreds were killed in this central area of Luzon.

The devastation wasn't helped by the fact that the eruption was accompanied by heavy rains from a typhoon, which brought the volcanic ash down onto villagers' dwellings and caused roofs to collapse.

Today you can still see the tops of buried buildings poking out from the ground. 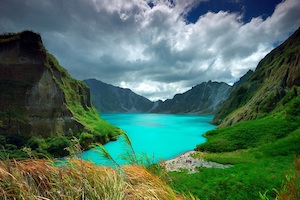 The beauty of Mt Pinatubo today

The Philippines sits on the Pacific Ring of Fire and has over two hundred volcanoes, twenty-two of which are currently active in some way. 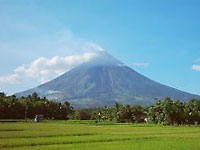 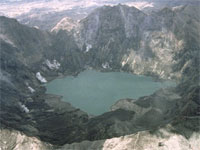 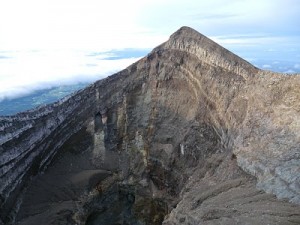 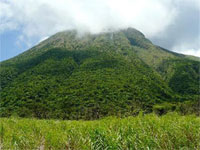 The country's highest mountain, Mt Apo, is an inactive volcano.

Several volcanoes are quite close to Manila, and the eruption of one of these - Mt Pinatubo, in 1991, caused day to turn to night in the city.

The Philippines most active volcano is Mt Mayon, which dominates the skyline near the town of Legaspi, south of Manila in the Bicol region.

This volcano is known to have erupted 48 times, and is particularly famous for the fact that is it an almost perfectly symmetrical shape. Its crater is permanently smoldering.

We offer treks up the slopes of Mt Mayon, and details can be seen on our trekking page here. Other volcanoes you can climb in the region include Mt Bulusan, which is a few miles south of Legaspi in a beautiful area with much wildlife.

When active, Mt Mayon Volcano treks are suspended. However, Mayon dominates the skyline and there are vantage points to view such activity, and the spectacle draws visitors from far afield. Visit Bicol and enjoy a tour of Albay province, whilst witnessing the splendour of Mt Mayon. MORE >>

In Sorsogon, the Bulusan Volcano is an active volcano in a natural rainforest. We offer a number of Treks here, of varying length.

Before this area acquired national park status, there was a lot of illegal logging. Now the Bulusan rainforest is fast recovering and has become an attractive and diverse place to explore. 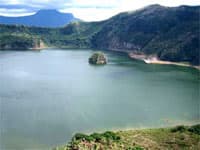 One of Taal's greatest eruptions in recent years was in January 1911. Many local farmers were killed by the blast, and a tidal wave across the lake drowned those in boats too. Over 1300 people died in just one day.

The town of Tagaytay gives a spectacular view of Taal Volcano and lake, and there are various activities available for visitors. We offer excursions to Tagaytay and Taal volcano to our visitors to Manila. There are several high quality hotels for those that wish to stop overnight. Please enquire.

Quite a mountainous island, off Mindanao, there are an amazing seven volcanoes present. Hibok-Hibok - the only one currently active, last erupted in 1951.

The coastline of this island is quite beautiful, with its mountainous backdrop, although the sands, as you'd expect, are volcanic grey. Mt Mambajao is the tallest of the volcanoes on this island at 5,619ft. The capital of Camiguin Island is also called Mambajao.

Philippine trails can organise tours for those that wish to explore the most popular Philippines volcanoes. Please enquire.

In the South of the Philippines, we offer a 3 day challenging trek of Mt Kanlaon, Negros, and also a slightly easier 2 day trek of Twin Lake crater lake, in South Negros.